Richard Sylla is a living legend in the sport of Savate or Boxe Française. For many years he dominated the light weight division with fitness, skill, accuracy and knock out power. He was nicknamed the Muhammad Ali of Savate and became a house hold name through out France – he was in many years the epitome of what a Savate champion should be. Sylla had spent time in his youth boxing and in 1984 made pre-selection for the French Olympic boxing squad, but was not selected for the team. While this was a loss for boxing it was Savate’s gain and when Sylla switched his focus towards the French sport he never looked back. 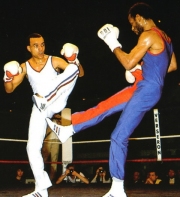 During his competitive career Sylla gained a repretation as a knock out specialist and after reaching the finals of many French and European championships his opponents would often pull out of the competition. Sylla won the French championship 10 times, the European championships 3 times, Paris international championship 3 times and the international championships 7 times. His Savate fight record is listed as 69 fights for 68 wins with his only single loss, which he suffered while fighting with a dislocated shoulder, was to the tough Dutch fighter Lucien Cardin. Cardin was a member of the Dutch team captained by Dutch legend Fred Royers. 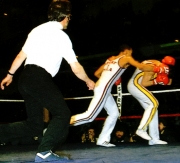 An outstanding champion in a number of ring based combat sport Sylla branched out into the international kickboxing scene during the 1980s. Quickly establishing himself as quality world champion, he was the F.N.B.A. French champion, the E.P.K.A European champion and the W.K.A world super light weight champion. His recovery over the legendary Peter “Sugarfoot” Cunningham was both bitter sweet. Cunningham refused to have the loss record on his record claiming he was robbed but those who have seen the fight and the sanctioning body acknowledged Sylla as the winner. Both fighters gave an outstanding performance but it was Sylla who was the aggressor and the busier fighter. Sylla fought a no nonsense style not risking making a mistake against a skillful fighter as Cunningham. Controversy over the outcome of this match is still debated today. 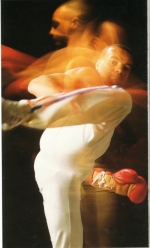 Another notable fight for Sylla was against the tough Japanese superstar Saito, which was a war fought in Tokyo, Japan. Sylla received a prohibited knee strike to the groin from Saito. The force of the illegal strike was enough to split Sylla’s groin cup and put him out of the fight.

They fought a rematch in Paris, with Sylla getting the nod over the distance in another tough fought bout. He also had victories over Island Brian Cullen and American Jeff Ortiz while fighting under the W.K.A banner.

Today Sylla is still very active in the sport. He currently serves as the head coach of Sport savate at I.N.S.E.P – the national institute of sports and physical education where he trains the elite French Savate team.

Having won more national and world titles than an other Savate fighter Richard Sylla will be remembered as Savate’s most versatile and successful champion.